Welcome to the first Player XP Quarterly Market review. Through our audience analysis technology, we believe that Player XP can provide a unique perspective on the games industry and through this review, we can help give a new view on the industry’s latest releases and major titles. This first quarterly review will take the form of a blog article but going forward, we’ll be running this as a newsletter so look out for the Newsletter signup link at the bottom of this article.

The structure of this review is simple, we track the major releases from the last 3 months, monitor their performance across multiple sources including Reddit, User Reviews & Social data and compile the results into an easy to understand visualisation. As well as looking at the major releases from the quarter, we’ll also evaluate the impact they’ve had on the more established titles whilst also looking at the major changes driven from updates within those games.

Looking at the above image, which looks to track the performance of a number of the new releases over the last 3 months, we can see that it’s been a relatively quiet quarter for new releases. Whilst there have been a couple major titles hit the market the majority of the new titles have been met with low levels of activity in their respective communities.

Looking at the projected volumes over the first 90 days of release, we can see Morhau’s current community activity is on course to exceed Mortal Kombat 11’s release. When looking at the sentiment reaction to each game, we can see the strongest player reaction has been for Dreams, Total War: Three Kingdoms, Judgement & Super Mario Maker 2.

The belief that it’s been a relatively quiet quarter for the industry is only further supported when looking at the average amount of posts for all new releases from Q2 and comparing them against the top live titles Player XP is currently monitoring. One stand out for the major titles is the lack of community interactions around PUBG, a title that has been a mainstay in the news for the last 2 years and one that we previously saw significant positive changes in player opinion on. 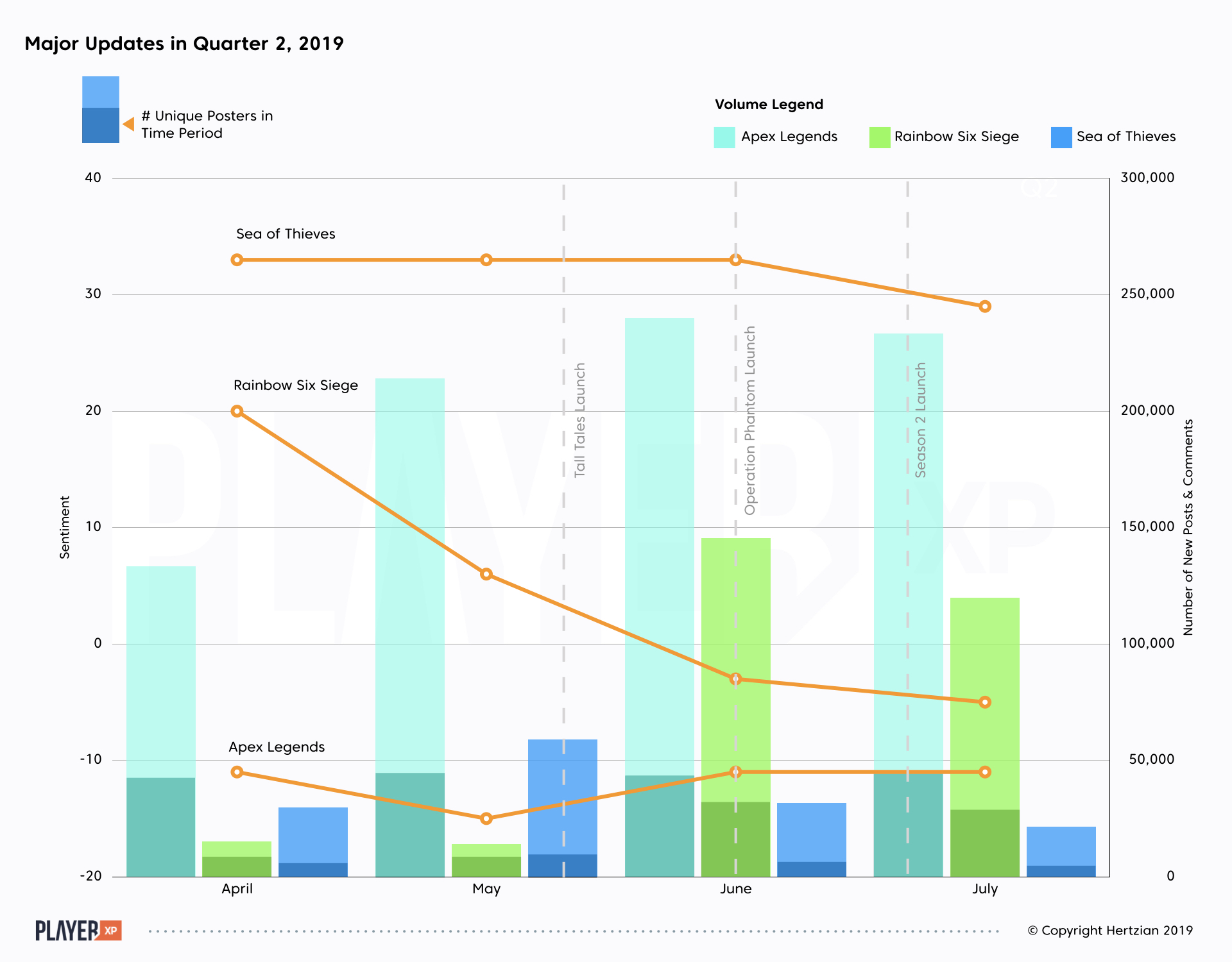 As part of the analysis of the most recent quarter, we wanted to not just focus on the new releases but also to look at the live titles we are monitoring and any events/updates taking place within them. Through this, we’ve identified major updates across 3 titles: Apex Legends, Sea of Thieves & Tom Clancy’s Rainbow Six Siege.

Given the popularity of Apex Legends, and the question marks around their player counts, we wanted to see if the release of their 2nd Season had any major effects to player reaction and community post volumes. We actually cheated slightly here as Season 2 launched right at the beginning of July but rather than wait until the next update, we wanted to include it in this analysis. What we can see is that whilst the new Season prompted a significant spike in the volume of posts and comments online, the number of unique posters did not match the same growth. This means that roughly the same amount of people posted month on month but around the release of the new season, we saw the number of posts per community member increase dramatically. It seems that whilst the new season has led to an increase in community activity, as well as sentiment, it may not have been enough to bring new players in.

With the Sea of Thieves Tall Tales update launching in May, introducing more story content, we saw a spike in both volume and unique poster numbers for the title although it seems the activity seems to have dropped back to normal levels in June. Its sentiment remains extremely positive.

Finally, a shout out for Rainbow Six Siege, one of the first leaders of the modern ‘live’ game. It continues to see a strong reaction to new content and major updates and Operation Phantom’s new characters and content saw a large spike in both posts and unique posters.

Looking ahead to Quarter 3, 2019, we’re excited to see how the industry ramps up towards the busy holiday period, as well as how the next generation of consoles may impact the number of new releases we see this year. In terms of content, we’re already looking at the reaction to PUBG’s Survivor Pass 4 and whether the changes it introduces captures the interest of its existing audience and helps boost the titles online community activity. We’re also looking forward to seeing if the Fortnite World Cup brings more focus back onto the behemoth. Beyond these big events, we’ll be looking at how the annual sports releases, Borderlands 3, the news Gears and many other new games make up our New Release Analysis.

As we are nearing the busy period of the year, we may also start to send out a more frequent New Release Analysis newsletter and as stated at the top, to sign up to the newsletter, please head here.

Thank you.
The Player XP team.

Signup to the newsletter here.

To find out more about how Player XP can assist your teams with their community management, player support or any other area of business, please email us at hello@playerxp.io.