What is Behind COD Warzone’s Negative Sentiment?

Home › News › Insights › What is Behind COD Warzone’s Negative Sentiment?

Using Player XP, we could identify that Activision’s Call of Duty: Warzone currently has an all-time sentiment of -18. On the Player XP dashboard, we have gathered over 2.3 million interactions from various data sources that we monitor for the game.

It is interesting to see that a game with such a large playerbase has a very negative sentiment, so we are bringing you this blog to give you insights into what is causing this negative sentiment and the pain points that Activision’s community are experiencing. We will also show you how you can use the feature-rich Player XP dashboard to get insights into any game.

Using the Data Overview of the Player XP dashboard, we can see the total number of interactions left for the game, its all-time sentiment, the estimated community size, and the sources we monitor for the game’s data. Player XP currently monitors Reddit, YouTube, Microsoft, Metacritic and Twitter for COD Warzone. For the Twitter data source, we have 4 custom searches set up – these are ‘COD Hashtags Mentions & Replies’ and ‘Gulag Mentions & Replies’.

As you can see from the image above, the Sources table shows you the number of interactions from each data source and the average sentiment of total interactions.

Using the Sentiment Drivers on the Player XP dashboard we can view the top 5 topics in Warzone with the most positive and negative sentiment. Interestingly, the most negative topic in the game is “Cheaters” with a very negative all-time sentiment of -85. This implies to us that a lot of the discussion around the game is from players cheating which is causing a lot of negative reactions from the community.

This topic has over 40’000 interactions, showing the large number of players who have experienced an issue with “Cheaters”. Activision could use this data to identify this as a major pain point in their game which is causing negative discussion in the community and needs to be addressed. Warzone has so many topics with a negative sentiment that the second topic in the ‘Most Positive’ Sentiment Drivers table has a negative sentiment of -3.

The only topic with a neutral sentiment is “Plunder”. This is a game mode in Warzone which has received some neutral & positive feedback as some players enjoy the game mode. Despite this, it only has an all-time sentiment of 4 which shows that gameplay issues still influence the sentiment and feedback of players even for areas of the game they like. You can see more data for each topic using the “Explore” arrow in the Sentiment Driver tables.

The large majority of interactions left for Warzone are from the Online Communities channel. The online community channel we monitor for this game is Reddit. This has over 1.9 million interactions all-time of the game’s total 2.3 million interactions and has an average sentiment of -20. For this channel, “Cheaters” and “Cheating” appear in the Most Negative Sentiment Drivers with -86 & -80 sentiment. From the data we can see it is clear that a major negative to the game is players cheating.

The Sentiment Split graph for this channel shows that since we started gathering data for Warzone in March 2020, over 70% of total interactions have been negative in 12 of those months. This shows the consistency that players have been negatively discussing the game since its release.

For the Social channel, there have been over 390’000 interactions all-time with an average sentiment of 5. However, many of the interactions have still been negative with the 5 Most Negative Sentiment Drivers having over -70 sentiment. The top 9 terms in the Talking Points table for this channel also all have a negative sentiment. This shows the majority of discussion continues to be negative for this channel but the community on Social channels still discuss some positive elements of the game.

By clicking on the Online Systems category we can use the Sentiment Drivers to see that issues with players being banned and more issues with cheating are causing the majority of negative discussions within this category. Viewing the data in the Game Stability category we can see that the most negative topics are “Unplayable”, “Crashes”, and “Error”, showing us that bugs & errors with the game are yet again making it unplayable for many. 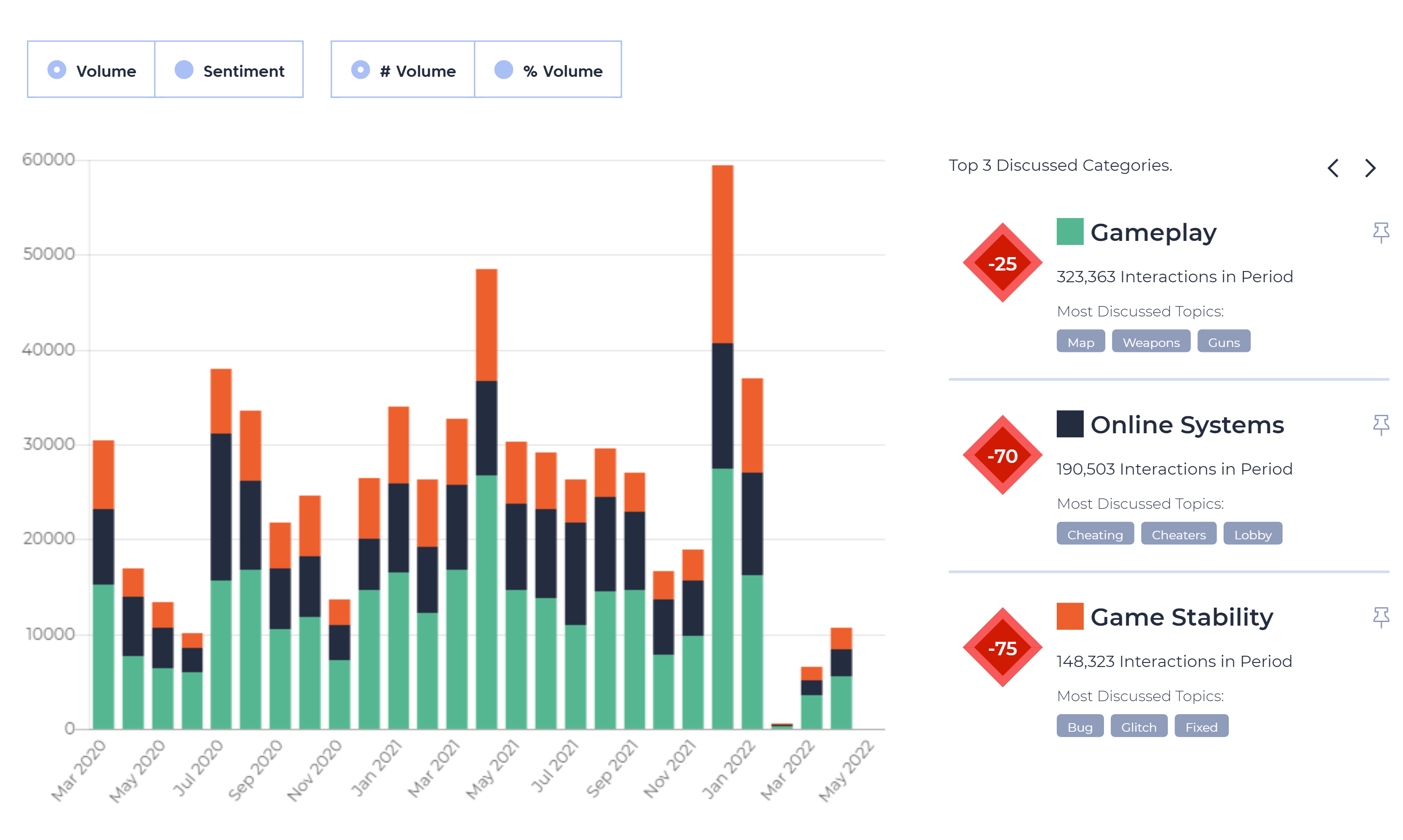 This demonstrates how you can use Player XP to dive into your community’s data and gather in-depth insights which can help you understand your community and make important decisions around your game.

This shows us that all members of the community who have either played the game shortly or for its entire life have experienced issues with the game and are leaving negative feedback. Members who have been in the community for longer will have experienced more issues with the game so there is a higher number of interactions with negative sentiment. This could also explain why a lot of negative sentiment is toward the developer, as this shows they may not be listening to players and have not worked to improve the game since its release. 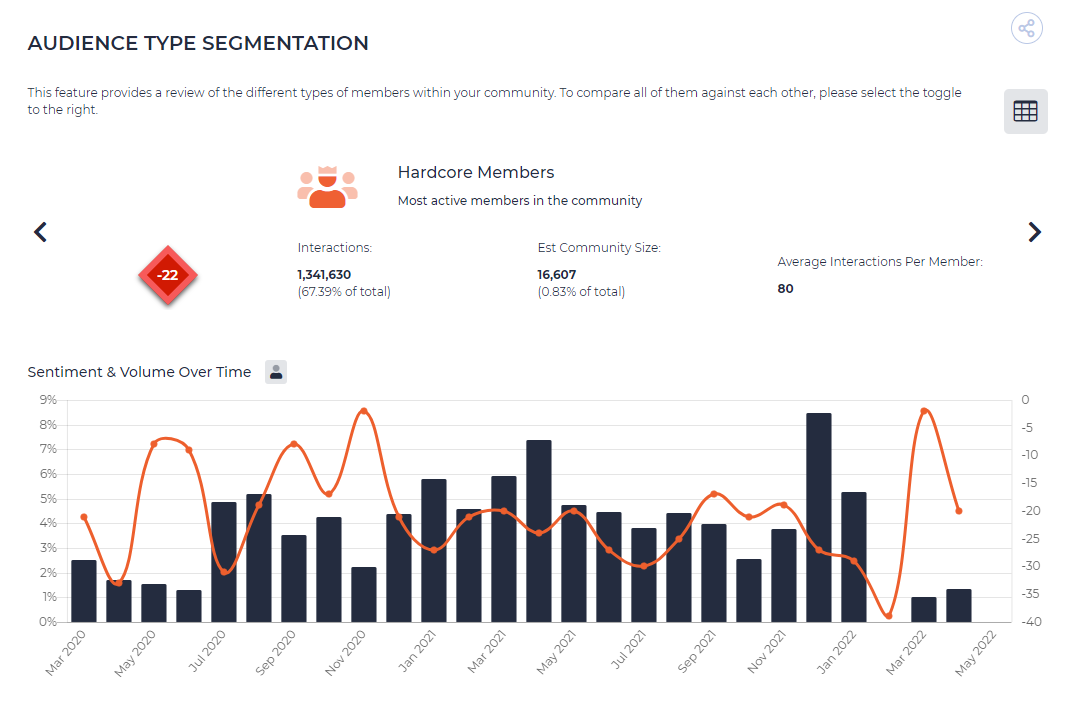 What The Players Are Saying

When viewing User Reviews in the Interaction Explorer the average sentiment of all interactions is -48. Using the ‘Show Category Counts’ button you can see the number of User Reviews left in each category and its average sentiment. In the Interaction Explorer, we can see that many players who have left reviews are complaining about bugs and glitches in the game which are making the gameplay much less enjoyable. As we saw from the Sentiment Drivers, many players are also not happy with players cheating in the game. Many players still praise the game but say that without this issue being addressed the game is currently “Unplayable”.

Activision could use the Interaction Explorer to read threads of comments and reviews left by players so they get a clearer understanding of exactly what the majority of players are saying. You can use these comments and reviews to identify consistent pain points in your community and prioritise fixing them to improve your game.

This Data Shows Us…

From the data Player XP has gathered and analysed for Call of Duty: Warzone, you can easily conclude that despite having such a large playerbase to this day, the large majority of players do not enjoy the game and find it “unplayable” due to the large issue of players hacking and cheating in the game. This contributes to many bugs in the game which are negatively affecting the gameplay experience and therefore causing almost exclusively negative discussion in the Warzone community.

In this article, we have demonstrated how Activision and other studios could use Player XP to identify the sentiment around their game and what specific topics are resulting in players leaving negative interactions.

Thank you for reading, we hope this has given you insight into how you can use Player XP to get a much better understanding of your game’s playerbase and quickly react to your findings. If you have any questions or would like to suggest features to add to Player XP, you can contact us via email or Slack and we will be in touch.