Following on from last quarter’s Release Watch, we’re happy to reveal our latest update. We’re sticking with the blog format for a while yet but if you want to make sure you don’t miss any further reviews or industry insights from the Player XP team, sign up to the newsletter now. Keep reading to find out how the market has reacted to the top releases over the last three months.

For those that missed the last review, the structure is simple, we track the major releases from the last three months, monitor their performance across multiple sources including message boards, storefronts & social networks and compile the results into an easy to understand report. We also look at how the new releases compare to the mainstays within the industry and look to highlight a unique insight based on the quarter’s releases. This quarter sees the introduction of the annual sports games so we’re looking at how they stack up against last year’s releases.

As we build-up to the holiday period, we’ve seen a number of the year’s biggest titles release over the past three months most notably the introduction of the latest Borderlands and the release of the ever-popular Mario Kart onto mobile phones. Beyond these, this quarter saw the release of the annual sports games and the review timeline is occupied by four of the biggest sports games on the market.

Beyond the mainstream, we’re seeing an extremely positive response towards the latest Fire Emblem, Dragon Quest Builders 2 and of course, the hugely popular Untitled Goose Game. 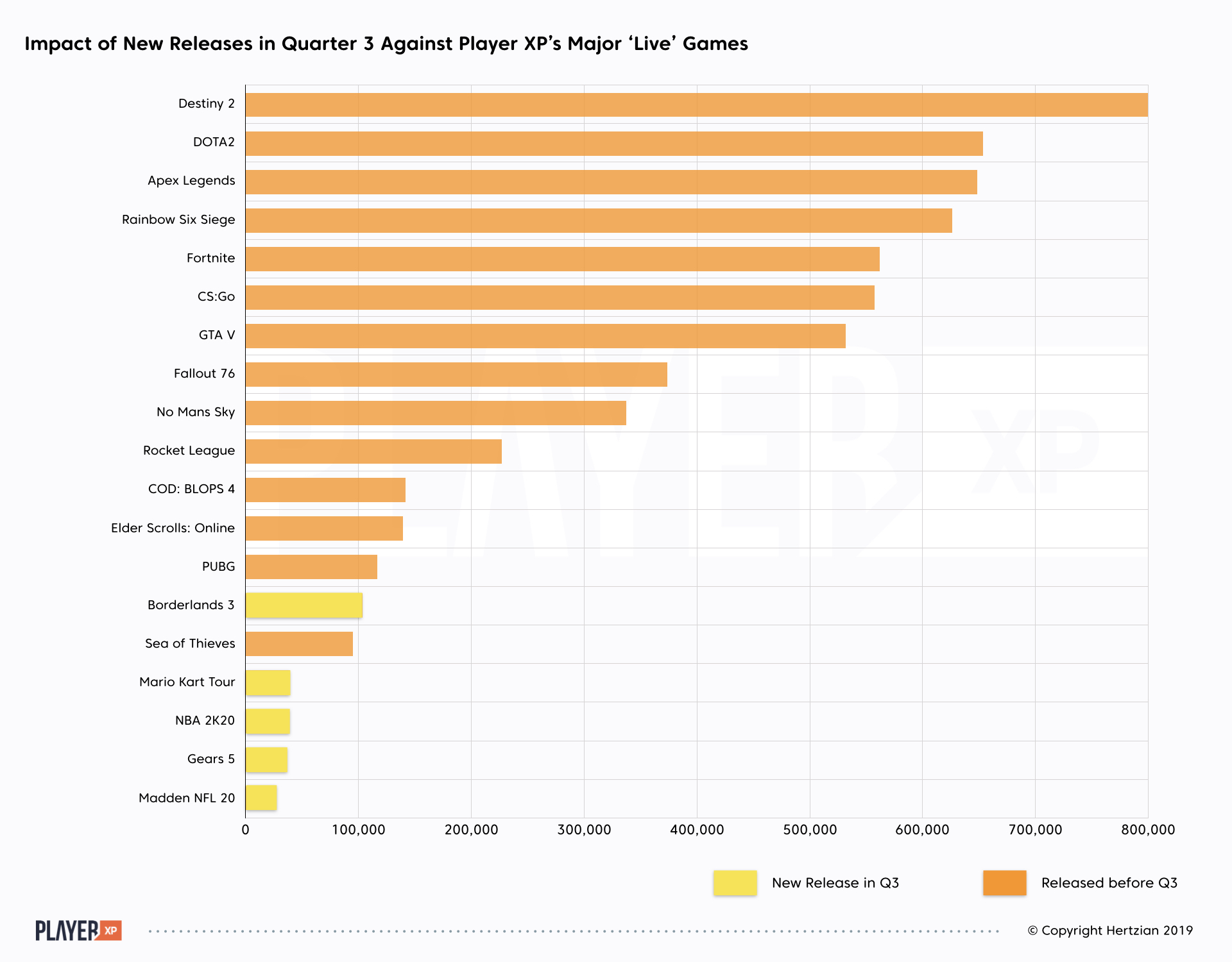 As established titles like PUBG and COD: BLOPS 4 continue to struggle to keep their communities engaged, we’re seeing increased engagement in Rainbow Six Siege & DOTA 2. It also looks as if the release of Season 3 in Apex Legends and the release of the latest update and transition to Steam for Destiny 2 have resulted in significant spikes in community engagement across those titles. As always, Player XP will be tracking the player reaction as each of those titles are released and another report will be published shortly before the Christmas season.

Impressively, given its very recent release, we’re seeing large amounts of early online engagement with Borderlands 3 and considering its average sentiment is positive, it may be that we have a new title to add to our ‘major’ list of live games. 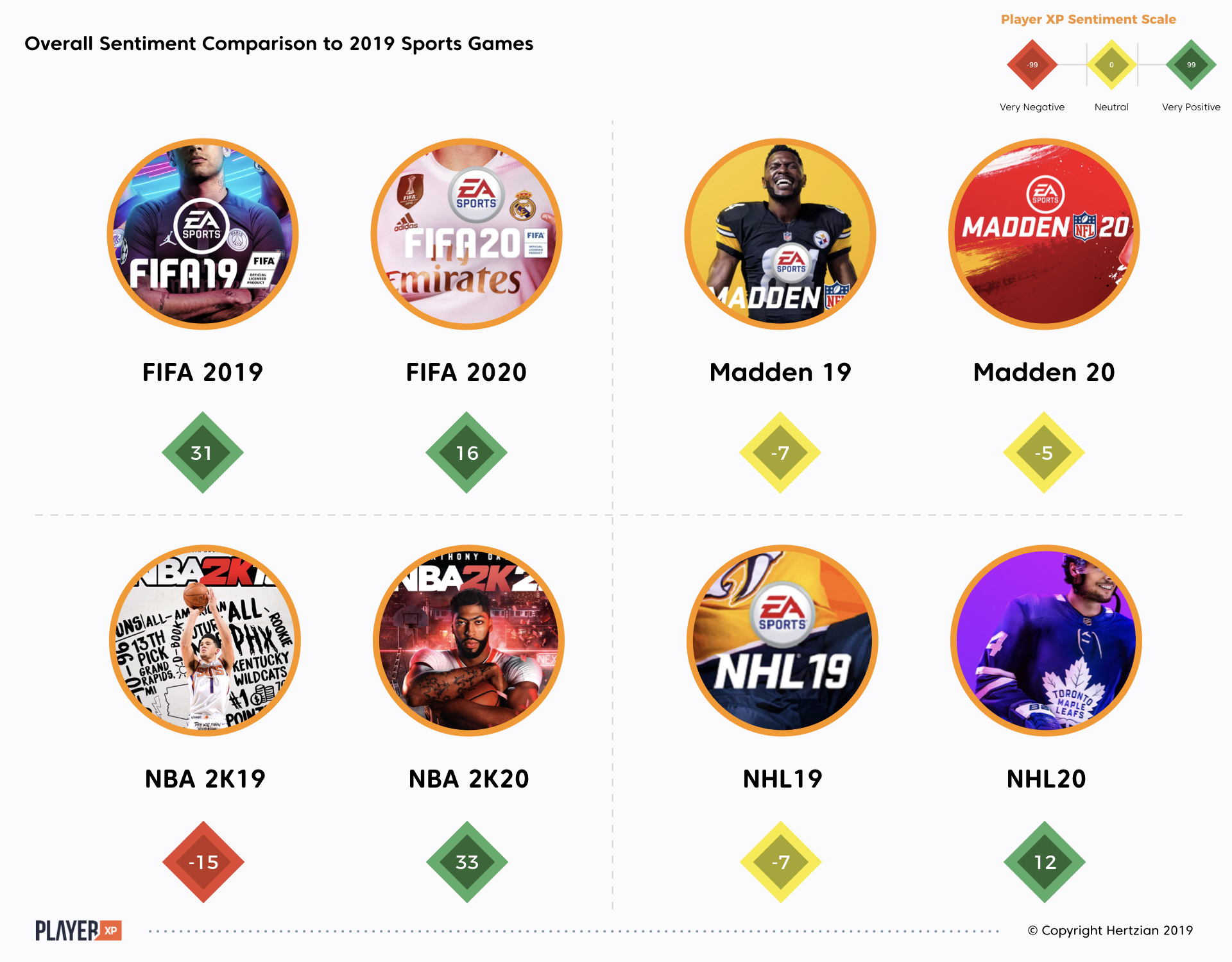 The annual release of new sports games across Football, American Football, Basketball & Hockey is something you can always guarantee to capture the attention of large amounts of players. However this year, we’re seeing an improvement on last year’s releases across all of the new titles apart from FIFA 20. The general trend for sports games is for their sentiment to improve across the year, as balancing changes take effect and the audience becomes more refined, so it’ll be interesting to see how these titles change in sentiment in the coming months.

If this quarter was the warm-up for the holiday season, next quarter will be the main event with the releases of major titles like the latest Call of Duty, Star Wars Jedi: Fallen Order, Pokémon Sword & Shield, and Hideo Kojima’s highly anticipated Death Stranding. As always, Player XP will be monitoring the reaction to each of these releases, and more, as they are released, and our next report will be published shortly before the holiday break in December.

Away from our Release Review, we’ll soon be sharing some analysis we’ve done into the impact Call of Duty Mobile has had on the market. Remember, subscribe to our newsletter to make sure you get that straight into your inbox.

Thank you.
The Player XP team.

Signup to the newsletter. To find out more about how Player XP can assist your teams with their community management, player support or any other area of business, please email us at hello@playerxp.io. 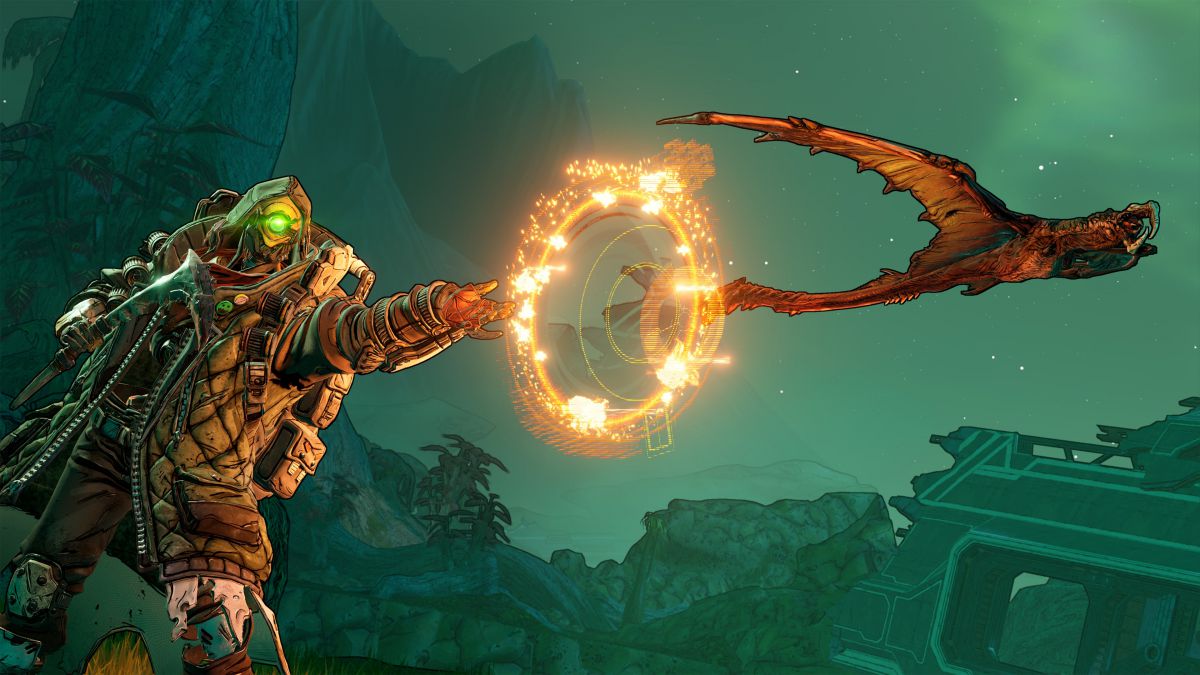