Home › News › Why Use Player XP? › Doing More With Your Community Data – Finding the Bad Within the Good

When all is going well for your game, it’s difficult to remind yourself to stop and look at the negative experiences players are having but it’s important to do so. If something is causing a negative player experience, leaving it unattended can lead to it becoming a major issue in the future.

The problem with this is that it’s often extremely difficult to find negative experiences. Yes, you may have support tickets but they often only point to the most extreme problem areas of your game. What about those areas that players are unhappy with, yet aren’t experiencing something like a crash or major blocker in their play experience?

This is where Player XP can help. With its dynamic dashboard, it’s extremely easy and quick to identify the negatives, as well as the positives. This article explores how Player XP can help you find the bad player experiences within large volumes of positive community discussion.

For this article, we’re going to be looking into Civilisation 6, a hugely popular game with a very positive and active community. It’s a game that mirrors a lot of our client’s games, live games that release frequent updates to a dedicated and loyal player base. Finding faults within their game is difficult, quantifying and prioritising them is even harder…

Using Player XP As A Feed for Community Data

The most straightforward, but perhaps most time-intensive method is to use Player XP as a feed of your community discussion. This can be done by using the Interaction Explorer and setting a filter to show the most negative comments in the past 7 days.

Once you’ve found a negative experience – in this instance, a player talking about having problems with “spies” in their game, you can then use the search engine feature (Topic Finder). This will locate all comments about the specific issue within your community data. The results are then returned on a Topic page just for that specific search term.

From here, we can closely examine the overall sentiment for the subject vs the rest of the game. When doing so, we can see that the sentiment in October has dropped significantly for this unit type, suggesting the original comment may represent a wider belief shared by the community. The good news is that currently, this issue is yet to affect the overall sentiment for the game as it’s still remained very positive overall.

When looking at the exact time period around the drop (from the 21st of October to today), we can also see that there has been a sizeable spike in the number of comments aimed towards this specific issue. However, it’s difficult to see what priority this issue should receive from the QA and development team just from this screen.

Checking Against Other Issues

One of the benefits of using a platform like Player XP is that we classify every comment that comes through our platform. In practice, this means that we analyse each comment for sentiment and discussion topics. Not only this, we also look to place topics into a category, one of these categories is our Bugs & Issues category. This category houses all comments where players are having a problem with your game. Once recognised, categories can be used to prioritise issues as they emerge.

We can also see an overview of what we reported earlier, that the volume of comments about the subject has dropped over time. This suggests that it might have been an issue that has already been fixed.

Quantifying Across the Whole Community

After identifying the issue as a consistent bug/issue reported by the player base, we have one final check we can run. The check will value how big of an impact fixing our identified problem will have. And that’s checking the issue against the entire community discussion.

If it appears near the top of the most discussed topics overall, with a negative or decreasing sentiment, then we know there is a big problem that we should look to address.

The best way to see the most discussed Topics within your games data is through the Topic Finder. Like Twitter, our search engine has a trending topics section which allows you to quickly see the terms that players are recently talking about.

This isn’t just looking at the most talked-about phrases, it’s comparing your game against every other game in our database to determine what unique subjects are being discussed. If that is statistically significant enough to be considered important for you to review.

Interestingly, when looking against all of the data, we see that the conversation around the Spy unit type is negative. More worryingly, Spy increases in volume and decreasing in sentiment over the last 7 days. This suggests that this is a higher priority than first thought and that whilst the original comments were complaining of a Bug, the continued discussion about this subject has continued to be negative.

Opening up the conversation about the Spy unit type shows that a recent change preventing the ability to spy on allies hasn’t gone down well with the community. This in fact could be prompting some players to believe the change was caused by a bug, as it’s a major change to some aspects of the game.

Cutting Straight To The Point

The above shows a natural pathway of how you might use Player XP to identify and quantify issues within your positive community. However, we’ve also just introduced an even quicker way to find player reports of negative experiences. This allows you to easily report and action problem areas within your game.

To do this, with every topic table inside the dashboard, you can easily filter down the data being aggregated just to the negative comments. This results in a ranked list of all of the problems players have with your game. 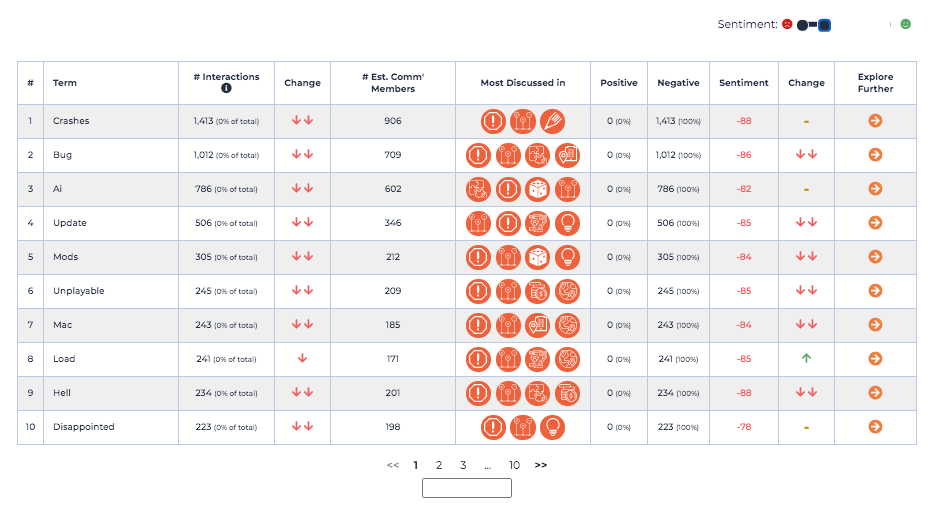 Similarly, we’ve also added the filter system to star ratings and recommended data points where available. This allows you to easily see the top reasons players did not recommend your game to others.

And with that final feature, we’ve been able to easily identify the most problematic areas with your game according to your community. Continued monitoring of these issues can help you identify if any fixes you put in place have positive responses or make things worse.

We hope this article has helped demonstrate how Player XP allows you to go beyond just reporting on sentiment and community discussion. Allowing you to dig into your data and answer questions that your team has.

If you are interested in learning more about Player XP, please do not hesitate to contact us at hello@playerxp.io.