Did Sekiro: Shadows Die Twice drive away its large playerbase by setting the bar too high for difficulty?

Home › News › Did Sekiro: Shadows Die Twice drive away its large playerbase by setting the bar too high for difficulty?

“On release day, Sekiro: Shadows Die Twice drew over 108,000 concurrent players on Steam, … the third highest of any Japanese game in the platform’s history.” [source]

Discussions about Sekiro difficulty have been prominent online since its successful release on 22nd March 2019. An article on Business Insider called it “Insanely difficult” whilst IGN UK explored accessibility from the perspective of someone with a disability. We’ve asked one of our analysts, Pete, to take a further look at the game inside the Player XP dashboard to see how wide-reaching the issue of difficulty is for the latest From Software release.

Over the last two months, Sekiro’s peak daily concurrent players have dropped by over 90%. At the time of writing, according to Steam Charts, Sekiro: Shadows Die Twice is currently averaging ~7,000 concurrent players. As a result of this, since the title’s release two months ago, sources Player XP monitors daily (reviews, online communities) have seen a steady drop in volume week-on-week. It isn’t all bad news though, since the start of April the game’s sentiment has risen to an impressive +47 (+100 is the top sentiment score available, -100 is the worst).

The first two weeks after Sekiro’s launch saw it drop 7.56 sentiment leaving it at a still impressive 30.42.

The sentiment drop seen shortly after release in Sekiro and Spider-Man happens for most games tracked by Player XP.

As you’d expect with a story-driven game, some (or most) of its audience leaves in favour of newer titles when they’re released. Before leaving, a number of players will leave a comment or two explaining why they wanted a change.

Typically these comments are more negative than other interactions causing the inevitable decline in sentiment. Fortunately, the players that remain still enjoy the game and their positivity often bring the game’s sentiment to new heights.

One thing which stood out to me about Sekiro: Shadows Die Twice was the instantaneous decline in sentiment. What was preventing some players from enjoying the game for even a week? Anyone browsing Sekiro’s subreddit during the game’s release will be aware of the number of posts discussing Sekiro difficulty.

It feels logical that people stopped playing a game focused on combat which they quickly found too difficult. After all, they didn’t have Spider-Man’s web-swinging to keep them busy.

What Can Player XP Tell Us?

First of all, we need to look at what players are talking about when they leave feedback online for Sekiro: Shadows Die Twice. A quick look at the Player XP dashboard for this title shows that the most discussed categories are Characters, Gameplay Design, and Bugs & Issues.

Sekiro’s characters have dominated the game’s online community discussions. Players leaving user reviews discuss other topics more equally, but still primarily discuss characters. Given that the characters category will contain interactions discussing bosses, it’s understandable that it’s such an important category. At the time of writing, “difficulty” is only the 20th most discussed topic in the characters category. However, Sekiro difficulty is the first topic with a negative sentiment. 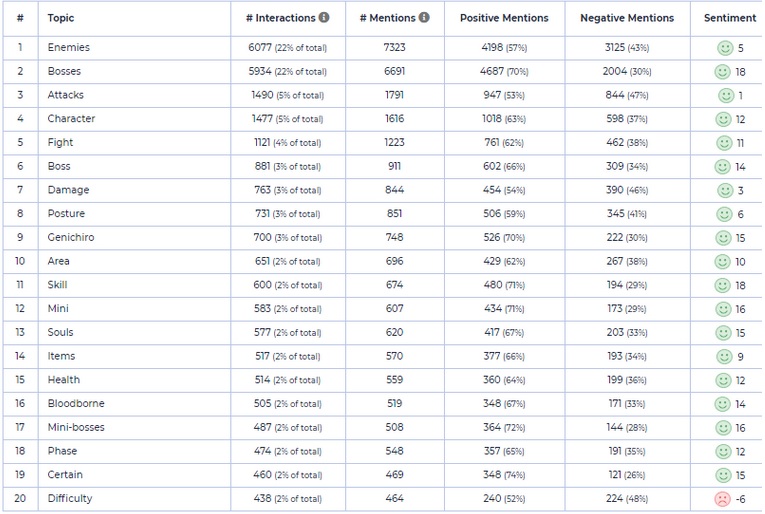 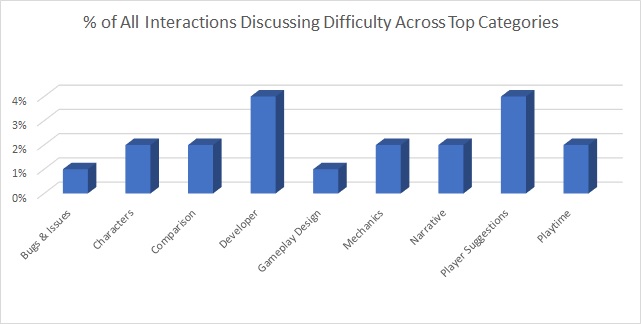 While 2% doesn’t seem like a lot, FromSoftware, Sekiro’s developer, has a history of making challenging games with strong Reddit communities. Sekiro already has 40,000 more subscribers on their subreddit than Far Cry 5’s subreddit. Given the sheer volume of interactions for Sekiro, 2% starts to feel significant.

Should The Game Be Made Easier?

While the addition of a Sekiro difficulty slider might see a relative minority of players return, its audience clearly loves the challenge. We’ve seen throughout the month of May the overall sentiment increase, to a peak of +61 with a large player base. Given the current trajectory of that sentiment, it can be expected to stay high. Would then adding a difficulty slider to the game, for the approximate 2% of players who struggle, really be worth it? When the majority of players are apparently very much enjoying themselves playing the game as it is? Making a major change like that would be costly in terms of both time and resources. It could easily have potential knock-on effects as the game’s mechanics are changed to accommodate it.